The local policing team publishes a Dales Police Report each month which can be viewed here https://middlehamtowncouncil.co.uk/police-reports/

Our neighbourhood Policing Team publishes a regular update on activity in our area.  These can be viewed here: https://middlehamtowncouncil.co.uk/police-reports/

You will have read that the Commissioner Philip Allott has resigned.  The consultation on community needs however is still being undertaken.  Please see earlier posts on this News page for links to the PFCC website (or hard copies are available from the Key Centre).

Police Fire & Crime Commissioner Consultation: Please Have Your Say on How We Keep Our Communities Safe

Please see below details of this consultation.  New Commissioners are required by law to set out their plans for the length of their term and ours wants to hear from as many people before Sunday 7 November as he develops his Police and Crime Plan, and Fire and Rescue Plan for 2021-2024.

The consultation document is here: https://www.northyorkshire-pfcc.gov.uk/content/uploads/2021/08/Consultation-2021.pdf

The survey is here: https://online.ors.org.uk/questionnaire/893FFE?clear_session=true&language=en

If you or anyone you know does not have access to the internet, the form is available as a paper copy which can be posted to the Commissioner by 7 November 2021.  This is available here NYPFCC 2021 Questionnaire PAPER FINAL and also from reception in the Key Centre, where completed copies should be left by Wednesday 3 November.

Local councils receive monthly reports from our neighbourhood policing team based on Leyburn which can be viewed here https://middlehamtowncouncil.co.uk/police-reports/

The latest bulletin is shown below.

Incidents of note over the last month;

Around the 17th June a waste bin has been destroyed and a bench has sustained fire damage in the gardens at Thornborough Hall, Leyburn.  There has been a noticeable increase in young people seen around Thornborough Woods and at the Folly recently, and whilst it is lovely to see everyone enjoying the gardens etc, please respect the area and those residents who live in the immediate vicinity.

Overnight on 17th June and again on 24th June between 18:30 and 21:00, two Little White Buses have had their tyres damaged in what appears to be yet another intentional act of criminal damage.  These two most recent incidences (in an increasing list of occurrences now), happened in the Gayle Lane area of Hawes whilst the buses were parked up for the night.  (#12210146543 and #12210142081)

At around 13:00 on 3rd July, a silver Ford Transit van was seen fly tipping at the top of the Buttertubs Pass. (#12210152392).   Richmondshire District Council and ourselves take fly tipping very seriously and so we ask if anyone witnesses acts such as this, to please try and get vehicle details and report it via ‘101’ (or online) as soon as possible.

Sometime between 9th – 10th July, graffiti has appeared on a stone farm building in West Stonesdale in Swaledale.

Enquiries into all of the above are continuing so if anyone has any information please do contact NYP.

As I write, we have not yet moved into the Fire Station but this is planned for August.  We will keep you updated as to when we have officially moved bases.

These are published each month on our website.  The latest is here https://middlehamtowncouncil.co.uk/wp-content/uploads/2021/06/Dales-Monthly-Crime-Report-June-2021.pdf

This month, the Leyburn Police have said ‘We are (apparently) in for a rather hot and dry spell of weather as we enter the middle of June – please can I remind everyone NOT to have BBQs and fires outside of gardens and private spaces due to the risk of fires starting in the open.  This also goes for ensuring you take your rubbish home (glass bottles and cigarette butts in particular pose a serious risk in sunlight/if not put out and not disposed of correctly)’

In response to the increased fear of pet theft, Neighbourhood Watch has launched a PROTECT YOUR POOCH campaign.

The campaign will run on social media from 17th – 30th May but those who do not use social media can support the campaign by displaying this poster in their community, or attending our online Dog Theft webinar on the 27th May at 5pm.  The webinar will be led by Neighbourhood Watch Network with speakers from the Met Police and Crimestoppers, as well as special guest speaker Katy Bourne, PCC for Sussex. To book your place, click here. 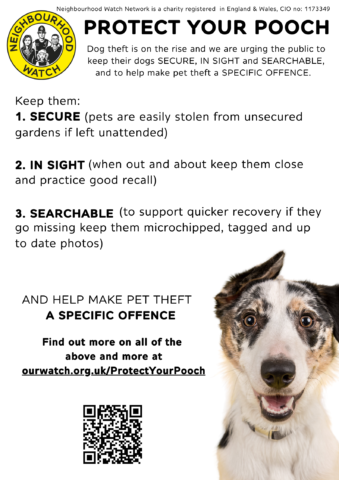 You can support the campaign by acting on our advice and sharing our messages in the following ways:

About guest speaker Katy Bourne, PCC for Sussex
Katy Bourne is in her third term as Police and Crime Commissioner (PCC) for Sussex. She was first elected in 2012, re-elected in 2016 and again in 2021.

For anybody who wishes to have a PROTECT YOUR POOCH campaign pack, please email Deborah.waller@ourwatch.org.uk.