Middleham is a small market town and civil parish in the Richmondshire district of North Yorkshire, England. It was recorded in the Domesday Book as “Medelai”. The name means “middle ham or village”, and Middleham is located in the stunning rural landscape of Lower Wensleydale.

The Town is steeped in history. Its heritage goes back to Roman times but it is probably best known as the boyhood home of Richard III. Middleham has an excellent example of a medieval castle, with substantial 12th-century remains and later buildings, which show the castle’s development into a high-status baronial residence. It is important for the many personalities associated with it, particularly the Neville family and Richard, Duke of Gloucester, later Richard III. The ruins of his castle still dominate the town to this day.

The 14th century Church of St Mary & St Alkelda planned by Richard III to be a Collegiate Church and, until recently a Royal Peculiar, is still the Town’s parish church.  A Richard III Festival takes place in early July each year.Middleham is also one of the North’s major centres for the training of thoroughbred racehorses, and Middleham Gallops on the High and Low Moors has produced numerous classic winners. The Town is often referred to as “the Newmarket of the North”. The sight of strings of these beautiful creatures riding through the town every morning to their training gallops is a huge attraction, whilst our annual Stables Open Day attracts many racing enthusiasts every year.

Middleham’s architecture is also worthy of note. Now predominantly Georgian, with many listed buildings it is worth noting that many of these buildings actually stand on much earlier foundations, our Town Trail will highlight the most noteworthy examples. 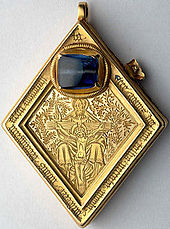 In 1985 the Middleham Jewel was found on a bridle path near Middleham Castle by Paul Kingston and Ted Seaton using a metal detector. It has since been acquired by the Yorkshire Museum in York for £2.5 million. It is a late 15th-century 68 gram gold pendant with a 10-carat blue sapphire stone. The pendant is lozenge shaped, engraved on the obverse with a representation of the Trinity, bordered by an apotropaic Latin inscription (i. e. one that wards off evil) protecting the user from epilepsy. The reverse face is a highly decorative engraving of the Nativity, bordered by the faces of thirteen saints.  A copy is displayed in the Castle.